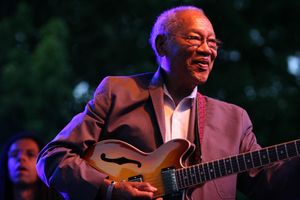 "The venerable musician, arranger and A&R man was content to saunter around the stage, stopping near whichever colleague he wanted to vibe with."
-United Reggae, July 2016

"When Ranglin came onstage, his musical memory was flawless. Over the course of a 90-minute set with Avila, he put on a clinic that touched on jazz, ska and, most certainly, reggae guitar."
-Seattle Times, August 2015

"Ranglin was a key figure in shaping the sounds of ska — influenced by New Orleans jazz and R&B — in Jamaica in the late 1950s. The effects of Ranglin's fluid and rhythmic playing on Jamaican music, from mento to reggae, are deep and long-lasting, but his work as a jazz artist is equally amazing."
-NPR, August 2014

"This is music built to last by a sage old cat who still happens to be one of the most interesting, and classiest, guitarists around."
-NPR, October 2012

Ernest Ranglin was born June 19, 1932, and grew up in the small town of Robin’s Hall in the Parish of Manchester, a rural community in Jamaica. Ranglin’s destiny was set from an early age when two of his uncles showed him the rudiments of playing the guitar. Ranglin learned how to play by imitating his uncles, but he was soon to be influenced by the recordings of the great American jazz guitarist Charlie Christian. He moved to Kingston, ostensibly to finish his studies at Bodmin College, but his true lessons came from guitar books and late-night sessions watching the Jamaican dance bands of the time. In 1948 he joined his first group, the Val Bennett Orchestra, playing in the local hotels. By the early fifties, he was a member of Jamaica’s best-known group, the Eric Deans Orchestra, touring around the Caribbean and as far north as the Bahamas. The big bands gave Ranglin the chance to learn how to orchestrate and arrange. The constant tours and meeting musicians from other traditions also gave Ranglin a wider vision. Once, for instance, in Nassau his performance was heard by Les Paul, who gave Ranglin a guitar in admiration of his talents.

In 1958 Ranglin was leading his own quintet, playing the leading hotels in Kingston and the resorts on the north of the Island. One engagement in Montego Bay was a show caught by a young would- be record producer called Chris Blackwell. Immediately impressed by Ranglin’s extraordinary talents, Blackwell offered him the chance to make a record. The album featured pianist Lance Heywood with Ernest Ranglin. It was the very first release by Island Records and the start of a long association between Ranglin and Blackwell. In 1959 Ranglin had joined the bassist Cluett Johnson in a studio group called Clue J and His Blues Blasters. This was a very different kind of style to the big bands: it was traditional Jamaican music superseded by a tough urban stance influenced by the pervading sounds of American R&B. Johnson and Ranglin recorded several instrumentals for producer Clement ‘Coxsone’ Dodd. The first of these tunes, “Shuffling Bug,” is widely regarded as the first example of ska, the shuffle rhythm which exaggerated the ‘jump beat’ heard on New Orleans’ R&B records of the fifties. Ska became the bedrock of Jamaican popular music, leading to rock steady, reggae, ragga and all the innovations the island has brought into the global mainstream.

Ranglin’s fluent and versatile guitar style, coupled with his arrangement skills, meant he was in constant demand right through the ska era, working with the likes of Prince Buster and Baba Brooks among others. Around this time Blackwell had a song he thought could be a pop smash. Blackwell brought young Jamaican singer Millie Smalls and Ranglin to London; they recorded “My Boy Lollipop” which, in the spring of that year, reached No. 2 in the U.K. chart. It went on to become a worldwide hit, the first time ska had infiltrated into the vocabulary of pop music.

In 1964 Ranglin was in London with Blackwell, who asked if Ranglin could play Ronnie Scott’s Jazz Club. Initially the manager was reluctant, but allowed Ranglin to perform. The reception the audience gave to his performance was overwhelming and Ranglin was invited to become the venue’s resident guitarist. He stayed for nine months, backing numerous guest artists as well as appearing on stage with the Ronnie Scott Quartet and Quintet. Ranglin’s tenure at Ronnie Scott’s brought him to the attention of U.K. Jazz audiences. Ranglin took first place in the guitar category of Melody Maker’s 1964 Reader’s Jazz poll.

Upon his return to Jamaica he found himself once again doing session work with Coxsone Dodd. He was involved in the recording of The Wailers’ track “It Hurts to Be Alone” released by Island Records. Ranglin was also music director for the recording of The Melodians’ song “Rivers of Babylon.” The closing years of the sixties found Ranglin working with the Jamaican producers Lee “Scratch” Perry and Clancy Eccles; both of whom were instrumental in developing and establishing the new genre of reggae. Ranglin played on the Eccles-produced “Say What You’re Saying” by Eric “Monty” Morris, which is one of the earliest records to feature reggae drumming.

In 1973 the Jamaican government awarded Ranglin the Order of Distinction for his contribution to music. Ranglin toured with Jimmy Cliff in the dual role of music director and guitarist, which resulted in the 1976 album “In Concert: The Best of Jimmy Cliff.” Ranglin was the lead guitarist on the Lee ‘Scratch’ Perry recording sessions for the 1977 album “Heart of the Congos” album by The Congos. In recent years, Ernest Ranglin has gone back to his roots and has made various cross-cultural collaborations and concept albums. In 2002 Ranglin was awarded an Honorary Doctorate Degree from the University of the West Indies for his outstanding contribution to the development of music in Jamaica.  In 2006 he was the subject of a documentary “Roots Of Reggae: The Ernest Ranglin Story” produced and written by Arthur Gorson. In 2008 Ranglin was inducted into the Jamaican Music Hall of Fame.

Ranglin shows no signs of slowing down and he continues to unselfishly give himself to the music, his fans and his collaborators, including the band he played and recorded with in the summer of 2011, Avila. Their music blends Ranglin’s beautiful ska reggae energy with an expansive new sound from this international supergroup of musicians. This band includes drummer Inx Herman, (Hugh Masekela, Paul Simon, Sting, Mickey Hart Band, Hamsa Lila), bassist Yossi Fine, (Gil Evans, John Scofield, Kenny Kirkland, Lou Reed, Rubén Blades, Stanley Jordan) and keyboard ace Jonathan Korty (Vinyl, Electric Apricot).