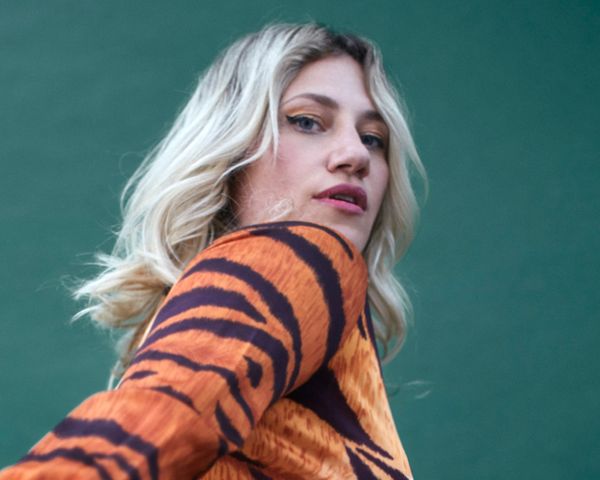 "One minute she’s radiating joie de vivre, the next she’s expressing deep bother – and hinting that that would possibly be fun too…wholly fearless.”
- Daily Mail UK

"Lucy is a deep, soulful vocalist who is as versatile and virtuosic as she is passionate.”
- Michael League (Bandleader of Snarky Puppy)

"Woodward ... was absolutely show-stopping behind the mic. Her vocal delivery was effortless.”
- Winnipeg's Uptown

"Ravishing Show. An unusually dynamic and skilled singer, who at the same time proved to be a masterful performer. Lucy Woodward is new to a Danish context, but what a singer! Power and radiance, and her vocal abilities showed great diversity and artistic range."
- Lars Borup, Aarhus Jazz Fest

"Friday night Hunter and Woodward had enough chemistry between them to ignite a couple dozen Bunsen Burners."
- All About Jazz

Lucy Woordward was born in London and lived in Amsterdam til she was 5. She moved to New York with her mother who was a musicologist-opera singer-belly dancer-school teacher and spent her summers in The Netherlands with her composer-conductor father. She went to public high school in The Bronx but was accepted early at age 16 to Manhattan School of Music, dropping out after one year when she realized she loved bebop but didn’t sing it. She started waitressing, singing jazz and blues standards for tips in NYC coffee shops, working in cover bands and singing on tv commercials. Lucy began writing songs, honing a new skill she didn’t know she had, and eventually signed her first record deal with Atlantic Records in 2003. She had 2 Top 40 pop hits, went to Japan for the first time and performed on The Tonight Show with Jay Leno.

But she left the pop world as fast as she came in leading her to release 3 more studio solo albums: Til They Bang On The Door (GroundUP), Hooked! (Verve) and Lucy Woodward is...Hot & Bothered (Barnes & Noble) – all albums rooted in blues, soul, jazz and pop which was quite the opposite of the world she had been living in just a few years prior. Lucy was asked to fill in last minute for the lead singer of Pink Martini having to learn material in Turkish, Croatian, Japanese, Spanish and French with 6 days notice, performing at festivals including Montreal Jazz Fest, Ravinia and 3 concerts with the San Francisco Symphony. She recorded the 1.4+ million viewed song “Too Hot To Last” with Snarky Puppy which is featured on their Grammy-winning Family Dinner album and has toured opening for them internationally on and off since 2011. She has performed with European Big Bands such as WDR Big Band in Cologne, Frankfurt Radio Big Band and TipToe Big Band in Denmark. She has sung background vocals with legendary artists including Rod Stewart, Celine Dion, Barbra Streisand, Joe Cocker and Chaka Khan and has contributed her vocals and songs to countless soundtracks such as What a Girl Wants, The Blindside, Last Vegas, Footloose, New Year’s Eve and Ice Princess, where she covered the Betty Hutton/Bjork Big Band classic “It’s Oh So Quiet”, also featured in the Birds of Prey trailer and other TV commercials. The album Music!Music!Music! is the debut collaboration with legendary guitar virtuoso Charlie Hunter, where they flipped vintage pop songs and classics from artists such as Terence Trent D’Arby and Bessie Smith. Having toured extensively in the US and Europe, their follow up album “I’m a Stranger Here” was released in early summer of 2021, including songs from The Cars, Elmore James and En Vogue. Lucy has just finished recording her 7th album produced by David Garza and will release it in 2022. Lucy travels back and forth to NY and LA but resides in Rotterdam most of the year where she is now learning to ride a bike, eat proper cheese and speak Dutch again which funnily enough, was her first language.